The Ups and Downs of Life

I had a super week last week and felt full of energy and enthusiasm.  It was a blissful feeling and I'm very glad I enjoyed it to the full.  This week has not started so well, unfortunately.  Nothing dreadful has happened, just silly things that drive me mad with frustration and all mean extra time and work to achieve the result I want.  Life eh?

I am currently having a bit of a tug-of-war with the island's council.  When we were in the process of moving house, I tried to find out where my children would catch the bus to school.  Eventually Pea discovered that the boy who lives at the farm next door is taken to and from school each day in a taxi, along with his sister and another boy, because they live too far from the bus stop.  I rang a man who appears to be in charge of the school transport system at the council to arrange for the same taxi to take Pea and H1 to the same school.  Guess what?  We don't qualify.  No idea why and he hasn't as yet given me a definitive answer.  He talks a lot but says nothing and I can't work out if it's because he doesn't really know what he's on about or whether it's a smoke screen to confuse me so I won't ask too many questions.  Either way it isn't getting me anywhere; another tactic must be employed.  So we are not allowed a taxi even if I pay; fine, but the 'bus stop' where they wait for the bus to come is a narrow strip of grass along the side of quite a fast, straight road.  There is no where else for them to stand, no street light or shelter and only my two children wait there.  There are two houses nearby but both are screened by trees, so no one can see them and the cars coming down the hill can't see them either.  In the afternoon they have to walk the 1.3miles home, as I have to go in the opposite direction to fetch H2 from his school.  The lanes they walk down are narrow and windy, as country lanes are.  The cars and tractors drive far too fast and there is no where to go to get out of the way of them.  There are no pavements or street lights and with the afternoons getting increasingly darker, the walk home is becoming a worry for us all.  This is my next request to the council:  if they won't let us share the taxi, can they provide a safe place for my children to stand while they wait for the bus. It must be well off the road for safety, well illuminated and sheltered from the wind and rain.  We will see how they react to that! 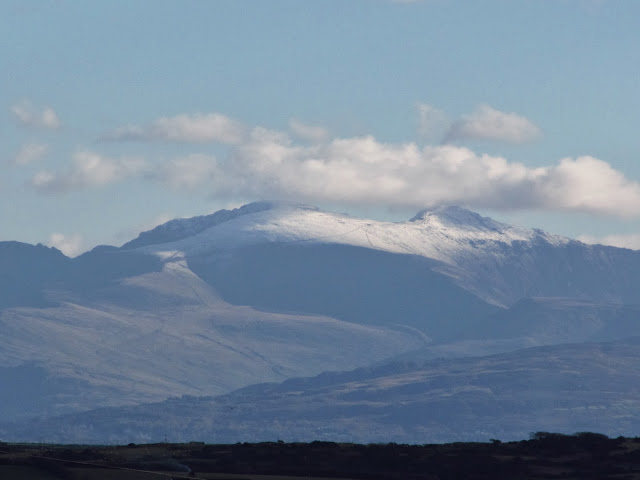 On the up side of life, Sunday morning gave us this!  There was a layer of swirly, feathery ice patterns on my car and later on we discovered the first snow had fallen on the mountains during the previous night.  Only a dusting and it will probably melt soon, as the temperatures are set to rise a little this week.  But it's still a joy to behold and it lifts my heart and helps me to remember the beauty in life, which is more important than silly rules made by people in offices.  Can you see the tracks in the snow made by the sheep? 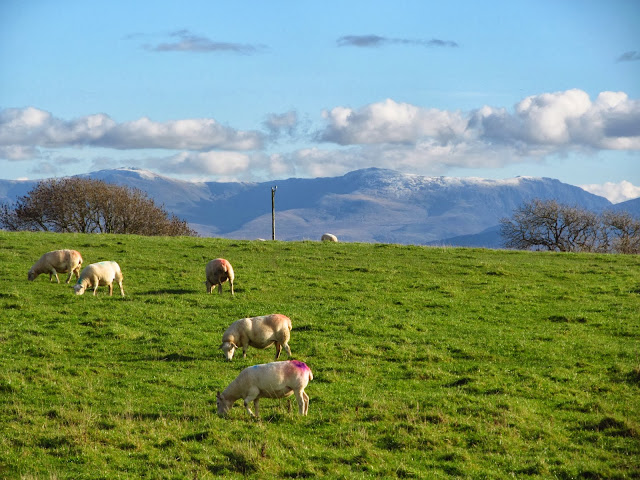 The four of us decided to take the dogs for a walk to the woods.  In all honesty, Pea and I decided and the boys had no choice but to tag along.  They seemed quite happy for once and talked about Star Wars and some other stuff that I don't understand.  It must have been pretty important, as each time Pea and I drew close to them, they told us to go away as they were talking.  Hmm, bit bothersome that.  Wonder what they were saying.  It was probably something I'm better off ignorant about. 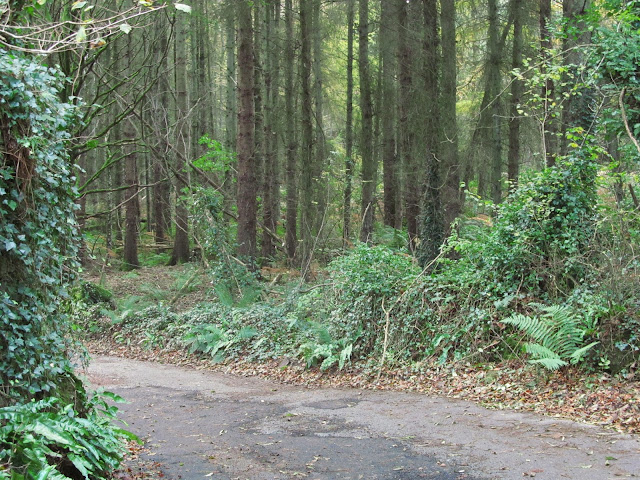 The woods are privately owned and so we can't go in them, sadly, but there is a lane that goes through the middle so we have to be content with that.  The atmosphere and the temperature change so much when you enter the woods.  I love the sounds and the chill in the air where the sun cannot penetrate the canopy.  On one side of the lane the trees are deciduous and the other side mainly pine.  There are lots of beech trees and the leaves are just beginning to change colour from grass green to acid green, yellow and rust. 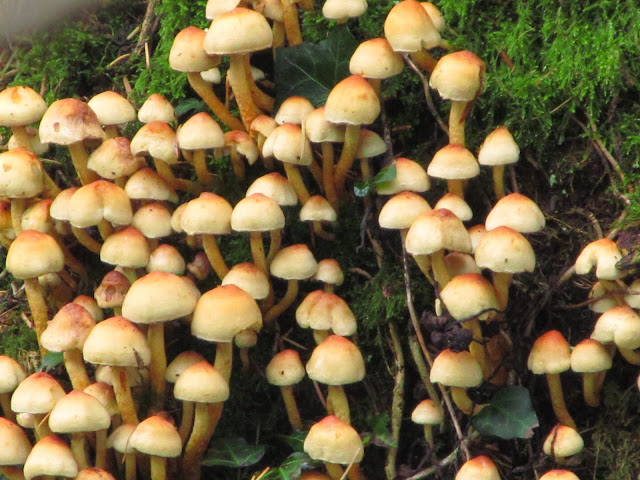 Pea spied this crop of tiny fungi clinging to a tree stump among a blanket of green moss.  I could quite easily believe in fairies when I see things like this! 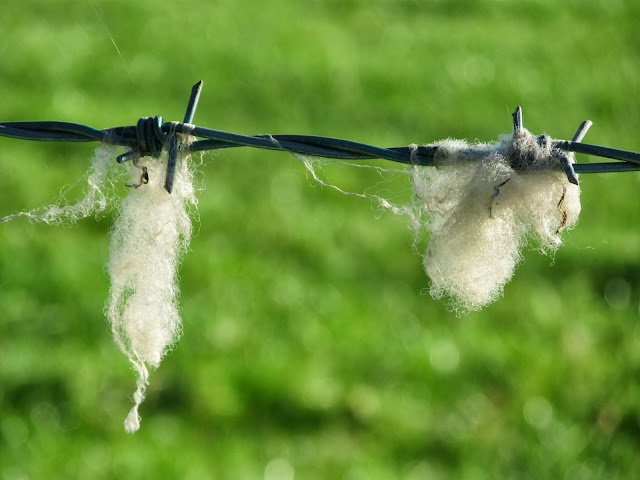 Another of Life's simple pleasures: sheeps' wool caught on a barbed wire fence.  I know, I am easily pleased!  It took me a while to capture this image as I wasn't sure what to do with my camera, but I fiddled about a bit (no idea what I did) and magically, I got the picture I wanted.  Yippee!  This says it all really.

This morning I woke the children as usual then went to put the kettle on the stove for my morning wake up panad.  A few minutes later I saw H2 come out of the bathroom, clutching his right side and obviously in a lot of pain.  I went to him and he burst into tears.  I helped him back into bed as he was clearly not going to school like that.  He said the pain started when he went to the bathroom and he could hardly walk.  I got him a hot water bottle to put against it and sat on his bed and hugged him.  My first thought of course was appendicitis.  He hadn't been sick or even felt sick, which is something, and soon started to look himself again.  About half an hour later he wanted to get up but I told him to stay where he was until I could be with him.  When he did move, he took it slowly and managed to get dressed by himself.  He has eaten well during the day and watched his Garfield dvd and read books.  He seems fine in himself but his side is still sore.  He went swimming yesterday with school, which he hates, and he had to swim on his back.  We are hoping he may have pulled something and it let him know about it this morning.  I will be keeping a very close eye on him this week.

While H2 was munching honey on toast (his favourite treat) in the kitchen, I tackled the cleaning.  I could have murdered Puppy when I found he had dug my lovely violas out of the pots by the back door and strewn them across the yard.  He then had the audacity to trot through the house with mud stuck to his paws and transfer it to my clean carpets.  He is a nightmare.  When he's asleep though, he's adorable.  Wish he was asleep more often. 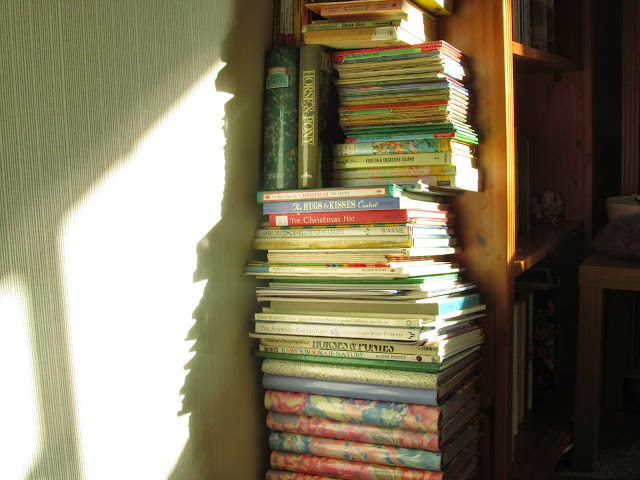 I am the proud owner of rather a lot of books and have been collecting them for most of my life.  Every time we move I get rid of a load, then once we are settled in our new home, I begin adding to them again.  This home is smaller than the last three houses we have lived in and there isn't much room for books that are not in the book cases.  I saw an idea on Pinterest a while ago that I loved:  hundreds of paperbacks all stacked up against a wall in a higgledy-piggledy fashion.  Not that practical if you want to read one, but a good way of storing and displaying beloved items.  This is what I've done with my photo albums and those books that I had as a child and some special ones my children used to love but have out-grown.  They are stacked against the side of a book case and are mainly hidden behind a chair, but they are there and I like them.  Thanks Pinterest!

One of the books I will be adding to my collection came this morning. 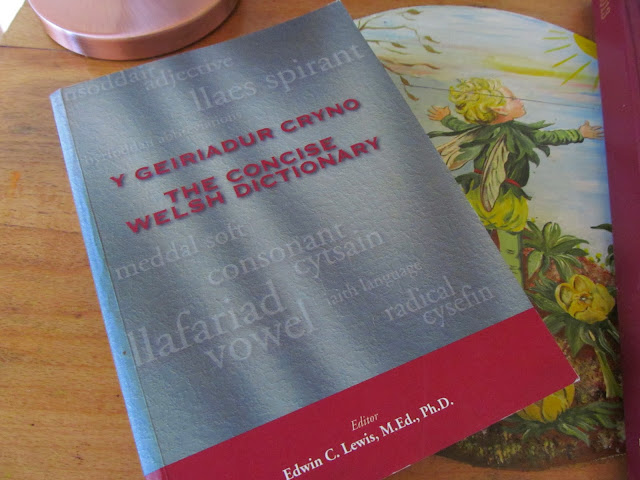 I flicked through it while having a break and a panad after my housework and it looks really good. Although I'm not sure about the sanity of a woman who can get excited about a dictionary.  Bit pathetic, really.  I'm still waiting for the welsh version of Harry Potter to arrive but once it does I will no doubt be using the above quite often!

The bathroom awaits my attention, but I think I will save that particular delight until tomorrow.  I have had enough fun for one day. 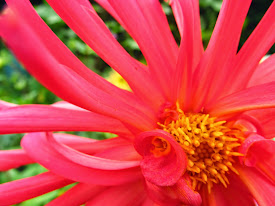